Welcome to Augsburg CGEE in Mexico!  CGEE has been offering educational programming in various locations in Mexico since 1979.  Since 1982 CGEE has operated a study center in Cuernavaca, about two hours south of Mexico City, with a permanent staff team.  CGEE’s longevity has allowed us to develop deep and trusting relationships with people and organizations across a broad cross section of Mexican society.  When you plan a program with CGEE you will experience Mexico’s cultural richness while getting a glimpse of the daily lives and struggles of its diverse population.

Take a moment to review a sampling of our program themes and the amazing locations available to you in Mexico.  Once you have selected a topic or two that you are interested in, contact CGEE staff via email or phone to discuss what you have in mind.  We will work with you to customize an itinerary for your next program.


Need to ask us some questions first? Submit an inquiry.
Ready to start customizing? Begin your application now!

Popular themes in Mexico include (but are not limited to):

Cuernavaca:  Known as the “City of Eternal Springtime” and the birthplace of revolutionary leader Emiliano Zapata, Cuernavaca is located two hours south of 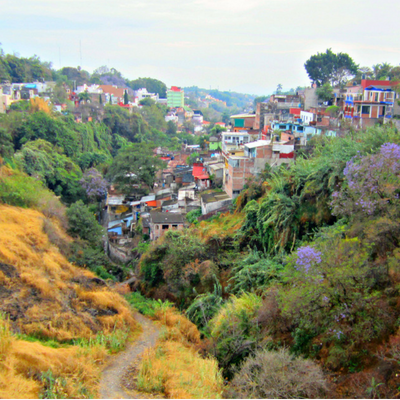 Mexico City in the state of Morelos.  CGEE’s study center is located near the city’s historic center, with a 16th century Cathedral and Hernan Cortés’ Palace.  The study center has dormitory style rooms, a dining room, a library, and classroom space.  When it opened in 1982, Cuernavaca was a focal point for the liberation theology movement under the late Bishop Sergio Mendez Arceo.  Since the establishment of industrial parks just to the south of Cuernavaca, the city has become a destination for poor farmers from neighboring states who seek factory work because they can no longer live off their land.  At the same time, affluent Mexicans from Mexico City own vacation homes in Cuernavaca. As a result of rapid industrialization and unplanned growth, the natural environment has deteriorated and one witnesses the extremes of abject poverty and great wealth side by side in Cuernavaca.

Amatlán de Quetzalcóatl:  Amatlán is a rural Nahua indigenous town in the state of Morelos about an hour outside of Cuernavaca that has organized to try to defend its cultural inheritance and indigenous spiritual legacy from outside exploitation.  It is a good option for a day excursion or for several days of homestays with local families. Participants can hike (30-45 minutes) to an ancient sacred site and learn about Nahua indigenous

spirituality and cosmovision. Participants can experience an indigenous sweat lodge (temescal).  Residents share about the history of communal land and current struggles to defend it, as well as about the racism that the community has faced.  Others share about their experience as immigrants, working in the U.S. or being deported.

Mexico City:  One of the largest cities in the world, Mexico City is a fascinating place full of contrasts.  Its population is very diverse since the capital attracts people from all over the country and from all walks of life.  It is an ideal place to witness great wealth alongside extreme poverty. Mexico City has many wonderful museums, urban parks, murals, historical architecture, theater, music, dance, and other types of cultural expression.  Participants stay in modest guesthouses or tourist hotels, either in the historic center or in the northern part of Mexico City near the Basilica of Our Lady of Guadalupe.

Teotihuacán:  The ancient Mesoamerican city of Teotihuacán is located about two hours north of downtown Mexico City in the state of Mexico.  Plan a day excursion to explore this archeological complex and climb the pyramids of the sun and the moon.

Oaxaca:  Oaxaca City, recognized by UNESCO as a World Heritage Site, is the capital of the state of Oaxaca in southern Mexico.  It is a city where all of the

historical periods of Mexico shine: pre-Hispanic, colonial, independent, modern, and contemporary.  Program participants stay at the Casa Arnel Hotel. Demographically, Oaxaca City is known for its indigenous population, which includes at least 16 highly differentiated cultures.  The Monte Albán pyramid site, located about 30 minutes from Oaxaca City, is one of the most impressive in Mexico. Oaxaca is an excellent location for programs focusing on women, indigenous and land issues, sustainable development, and immigration to the United States.

Teotitlán del Valle:  Established in 1465 in the rolling foothills of the Sierra Juárez mountain range about one hour east of Oaxaca City, Teotitlán is a Zapotec village that retains is culture and language.  Participants stay in the homes of local families for several days and meet with various women’s organizations and cooperatives in Teotitlán to learn about the daily lives of community members.  Participants can talk with traditional healers and experience an indigenous sweat lodge (temescal).

Chiapas:  A state in southern Mexico, Chiapas is best known for its diverse indigenous culture, progressive Catholic Church.  The Zapatista movement, which

has established autonomous municipalities, continues to struggle for indigenous rights.  Participants fly in and out of Tuxtla Gutiérrez, Chiapas’ capital, and often spend one or two nights there in order to meet with high-level state officials or visit the dramatic Sumidero Canyon.  The majority of Chiapas programming takes place about a 1 ½ hour drive away, in and around San Cristóbal de las Casas, a charming colonial city. Program participants stay at Posada Isabel Hotel in the heart of San Cristóbal de las Casas and take day excursions to surrounding communities.  Chiapas is ideally suited for programs focused on indigenous rights, revolutionary movements, the role of the church in social change, the environment, and issues related to women.

Puebla:  Puebla is a state in East-Central Mexico about a 2 ½ hour drive from Mexico City.  The Spanish founded its capital, of the same name, in 1531 and dubbed it their New Jerusalem.  UNESCO has designated the historic center as a World Heritage Site. To this day Puebla has a stunning Catholic church on every corner and a reputation for strong religious roots.  The fourth most populous city in Mexico, Puebla is home to more than 30 universities and technological institutes. Puebla is one of the most heavily industrialized areas of the country, particularly automotive and agribusiness.

Cuetzalan:  Set among the hills of the northern part of the state of Puebla, Cuetzalan is a small indigenous town surrounded by coffee plantations.  About a four hour drive from the city of Puebla, Cuetzalan is known for its weekly Sunday tianguis (market) will stalls selling indigenous handicrafts and produce.  Program participants stay at Hotel Taselotzin, which is owned and operated by local Nahua indigenous women.  Community members will share their experiences with migration to the U.S. in search of work. Leaders of local women’s organizations and cooperatives will describe community efforts to oppose mega-development projects, which has hydroelectric dams and mining projects, offering opportunities to reflect on the impact of globalization in this setting.  Possible day excursions include the Yohualichan (“House of the Night” in Nauhuatl) archeological site with a Totonac ceremonial center or La Cascada de las Brisas (waterfall).

San Miguel de Allende:  Considered to be one of the most attractive cities in Mexico, San Miguel de Allende is known for its baroque Spanish architecture. It is located about five hours from Mexico City in the eastern part of the state of Guanajuato. In addition to visiting women's organizations and learning about Mexico's diverse cultures, women's health and social justice issues, program participants may visit Vía Orgánica Eco-Ranch outside of the city, an ideal location to study sustainability and environmental justice. Hands on activities allow participants to learn about the Ranch’s sustainable agriculture projects, including vegetable production, a shade house, a germination greenhouse, free-range chickens and turkeys, water catchment systems, reforestation, adobe construction, and composting toilets. Horseback riding and swimming in a nearby hot springs can be arranged.

Check out a list of activities we can do. This checklist can also help you customize your program to your group's goals and interests. Anything you would like to do that's missing? Let us know, and we can add it to your custom itinerary.

Our sample programs are continually growing! Check back soon for even more.

The prices below represent the typical per person cost for an 8-day/7-night program in areas of Mexico where we operate. Price can decrease when costs can be shared among a larger group of participants. These prices include one free leader, and do not include the cost of airfare.
This estimate is only an approximation based on other Mexico programming we have done.  After you have submitted your application and we have worked out an itinerary specific to you, the program cost and payment instructions will be sent. Group scholarships are also available on a limited basis.


Ready to start customizing with CGEE in Mexico? Start an application today!