Welcome to CGEE in El Salvador! For more than 30 years CGEE has been offering educational programming in the beautiful country of El Salvador, the smallest and most densely populated country in Central America.  In the early years, CGEE partnered with the Lutheran Church in El Salvador to bring church groups from the United States to hear firsthand testimony about the impact of the Civil War (1980-1992) on the lives of everyday Salvadorans and to show solidarity.  Since 1989, CGEE has had resident staff in El Salvador, allowing us to develop deep and trusting relationships with people and organizations across a broad cross section of society. When you plan a program with CGEE, you will get a glimpse of the daily lives and struggles of Salvadorans and will witness their faith and resilience.

Take a moment to review a sampling of our program themes and the amazing locations available to you in El Salvador.  Once you have selected a topic or two that you are interested in, contact CGEE staff via email or phone to discuss what you have in mind.  We will work with you to customize an itinerary for your next program.

Popular themes in El Salvador include (but are not limited to):

Comunidad Nueva Esperanza (New Hope):  A repatriated community of 400 former refugees who returned to Usulután, El Salvador in 1991.  This is a very

successful agricultural cooperative with over 500 manzanas (roughly 700 acres) of land and a highly organized participatory democracy.  All members of the community have free schooling and health care.  The community established an Office for Human Rights, a place where they can document, monitor and denounce any reported human rights abuses.  Regular festivals provide a stage for young people's theatre, song and dance groups, maintaining traditions and developing new works which reflect social, political and economic realities of El Salvador.  In 1995, the United Nations named Nueva Esperanza one of the top 50 model communities in the world.  Nueva Esperanza has a population of approximately 500 people from about 150 families.

Suchitoto:  Set amid beautiful rolling countryside near the site of a pre-Columbian Pipil town, Suchitoto lies on a small ridge above the southern edge of Suchitlán Lake.  About a 90 minute drive from San Salvador, it is near the original Villa San Salvador which was settled in 1528. Life in Suchitoto generally has been quiet, except during the 1980s, when the area became the scene of bitter fighting as the Salvadoran army struggled to dislodge the FMLN guerrillas from their mountain strongholds in the area.  Roads on the Guazapa Volcano still bear the crumbling remains of the trenches and dugouts used by both sides, now hidden beneath green vegetation.

Today, Suchitoto (the Nahuatl name means "city of birds and flowers") is experiencing a renaissance.  In 1997 it was designated as a national site of cultural 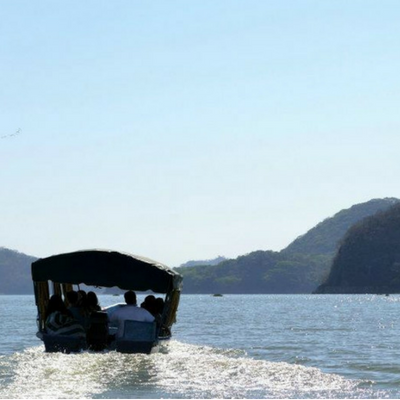 heritage. A small town, it boasts some of the finest remaining examples of colonial architecture in the country, with low, red-tiled adobe houses stretching along the town's streets.  The whitewashed Santa Lucía Church in the town center is being restored. Teatro de las Ruinas (Theater of the Ruins) hosts music, dance, and cultural events.

Ciudad Barrios, San Miguel:  The bustling city of San Miguel is about 80 miles from San Salvador.  Sitting at the foot of the Chaparrastique Volcano, San Miguel is the commercial hub of the eastern part of the country.  San Miguel really comes alive during the Fiestas Novembrinas (November Fiestas).  On November 29th it holds the largest Carnival in Central America.  Music, fireworks and street dancing mark the climax of two months of celebrations for the Festival of Nuestra Señora de la Paz, the city's patron saint.

The neighboring community of Ciudad Barrios is the birthplace of Monseñor Oscar Romero.  Romero’s father, the town postmaster and telegraph operator, apprenticed him to a carpenter when he was 13 years old.  However, Romero felt a calling to the Roman Catholic priesthood and left home the following year to enter the seminary.  He studied in San Salvador and in Rome and was ordained in 1942. Romero spent the first 25 years of his ministerial career as a parish priest and diocesan secretary in San Miguel.  In 1970 he became auxiliary bishop of San Salvador and served in that position until 1974 when the Vatican named him Bishop of Santiago de María, a poor, rural diocese which includes his boyhood hometown.  In 1977 he returned to the capital to succeed San Salvador's aged metropolitan archbishop, Luis Chávez y González, who had retired.

Perquín:  A small and, given its history, surprisingly friendly mountain town, Perquín is set in the middle of a beautiful landscape.  During the Civil War the town was the FMLN headquarters of the FMLN guerillas.  Radio Venceremos ("We Will Triumph") broadcast to the nation from a (literally) underground station.  Attempts by the Salvadoran army to dislodge the guerrillas mostly failed, leaving Perquín badly damaged and deserted.  Today, although the "town that refused to die" has repaired most of its buildings, the scars of war are evident everywhere.  Nearly everyone has a horrendous tale to tell. Even so, residents are determined to rebuild the community.

Perquín's main draw is the moving Museum of the Salvadoran Revolution (Museo de la Revolución Salvadoreña), set up by ex-guerrillas in the wake of the 1992 Peace Accords.  The curators traveled throughout the country collecting photographs and personal effects of those who died during the fighting.  There is a succinct summary of the process leading to the beginning of the armed struggle; displays of weapons–including missile launchers, bombs, guns and grenades–confiscated from the army or disabled after the signing of the Peace Accords; and examples of international propaganda aimed at bringing the events in El Salvador to the world's attention.  Outside is the bomb crater left by a 1981 explosion and a mock-up of a guerrilla camp. Behind the museum you can see the wreckage of the helicopter that was carrying Domingo Monterrosa (architect of the El Mozote massacre) when it was shot down by the FMLN in 1984. Perhaps the most moving exhibits cite eyewitness accounts of the massacre and drawings by refugee school children, depicting events as they saw them.  A separate room contains the transmitting equipment and studio used by Radio Venceremos.

Ruinas de Tazumal:  The Mayan ruins of Tazumal, considered the most important and best preserved in El Salvador, are located in the town of Chalchuapa.  In the Quiché language the name Tazumal means “pyramid where the victims were burned.” The excavated ruins are only a small part of a zone covering 4 square miles, much of it buried under the town.  Archaeologists estimate that Tazumal was settled around 5000 BC. The excavated structures span a period of over a thousand years. The artifacts found at Tazumal provide evidence of ancient and active trade between Tazumal and places as far away as Panama and Mexico.  Chalchuapa is about two hour drive from San Salvador.

Sample Programs:
Faith and the Struggle for Justice

The prices below represent the typical per person cost for an 8-day/7-night program in El Salvador. Price can decrease when costs can be shared among a larger group of participants. These prices include one free leader, and do not include the cost of airfare.
This estimate is only an approximation based on other El Salvador programming we have done.  After you have submitted your application and we have worked out an itinerary specific to you, the program cost and payment instructions will be sent. Group scholarships are also available on a limited basis.


Ready to start customizing with CGEE in El Salvador? Start an application today!